This post is a reflection on a book by Arlie Russell Hochschild, Strangers in Their Own Land: Anger and Mourning on the American Right.  In it she provides one of the most compelling and persuasive explanation for the turn toward right-wing populism in American politics and the peculiar appeal of Donald Trump.  As she puts it in her subtitle, this is “A Journey to the Heart of Our Political Divide.”

The book, published in 2016, is based on intensive interviews that she did in Louisiana with people on the populist right, long before Trump launched his campaign for president.  At the time, the political movement was the Tea Party, but her subjects ended up providing her an advance look at at the deep issues that led voters to support Trump.

There is no substitute for reading the book, which I strongly recommend.  But to whet your appetite, I provide some of the key points below and some of the most telling quotes.  You’ll find that a lot or her analysis aligns with the analysis by Michael Sandel in The Tyranny of Merit, which I commented on recently. 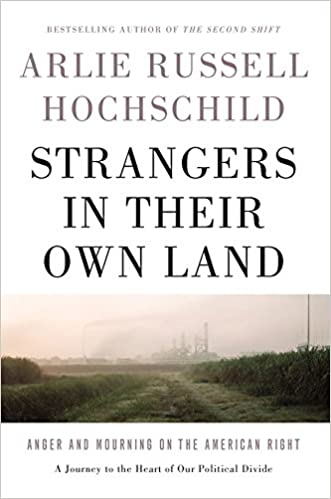 Here’s the heart of what people were telling her:

You are a stranger in your own land. You do not recognize yourself in how others see you. It is a struggle to feel seen and honored. And to feel honored you have to feel—and feel seen as—moving forward. But through no fault of your own, and in ways that are hidden, you are slipping backward.

As Sandel noted, the meritocracy leaves the uncredentialed with no basis for public respect.  Without SATs and fancy degrees, it’s like you don’t count or you don’t even exist.  This used to be your country and there used to be honor in simply doing your job, going to church, obeying the law, and raising a family, but none of that seems to be true any more.  Respect only now seems to go to those who who are moving ahead in the new knowledge economy, but you and people around you seem to be barely holding your own or falling behind.

How do you handle this situation?  Not by playing the victim card; that’s for a different kind of person.  “Like nearly everyone I spoke with, Donny was not one to think of himself as a victim. That was the language of the ‘poor me’s’ asking for government handouts. The very word ‘victim’ didn’t sit right.”  Instead, you take stoic stance, adopting one of three versions of what Hochschild calls the “endurance self.”

I was discovering three distinct expressions of this endurance self in different people around Lake Charles—the Team Loyalist, the Worshipper, and the Cowboy, as I came to see them. Each kind of person expresses the value of endurance and expresses a capacity for it. Each attaches an aspect of self to this heroism. The Team Loyalist accomplishes a team goal, supporting the Republican Party. The Worshipper sacrifices a strong wish. The Cowboy affirms a fearless self.

Each identity involves holding on in spite of the sacrifices you have to make.  The Loyalist sticks by the Republican Party even though it keeps betraying you time and again, as is so often the case in Louisiana.  They allow companies to pollute your environment and skimp on their taxes, but they’re still all you’ve got.

The Worshipper keeps the faith even though it means giving up something you really care about.

So you hang in there.  The Cowboy understands character as a willingness to take risks and live with the consequences.  You can make it on your own, without having to rely on welfare and special privileges.

To Donny, the Cowboy expressed high moral virtue. Equating creativity with daring—the stuff of great explorers, inventors, generals, winners—Donny honored the capacity to take risk and face fear. He could take hard knocks like a man. He could endure.

The people she spoke with had a deep suspicion of the state.

“The state always seems to come down on the little guy,” he notes. “Take this bayou. If your motorboat leaks a little gas into the water, the warden’ll write you up. But if companies leak thousands of gallons of it and kill all the life here? The state lets them go. If you shoot an endangered brown pelican, they’ll put you in jail. But if a company kills the brown pelican by poisoning the fish he eats? They let it go. I think they overregulate the bottom because it’s harder to regulate the top.”

For liberals, this stance is hard to fathom, because for them the institutions of the state are the key guardians of the public square, which is central to their values.  And this space is now under threat.

…In the liberal deep story, an alarming event occurs; marauders invade the public square, recklessly dismantle it, and selfishly steal away bricks and concrete chunks from the public buildings at its center. Seeing insult added to injury, those guarding the public square watch helplessly as those who’ve dismantled it construct private McMansions with the same bricks and pieces of concrete, privatizing the public realm. That’s the gist of the liberal deep story, and the right can’t understand the deep pride liberals take in their creatively designed, hard-won public sphere as a powerful integrative force in American life. Ironically, you may have more in common with the left than you imagine, for many on the left feel like strangers in their own land too.

For right-wing populists, the federal government is the biggest threat.  For those in the West, the feds are the ones who seem to own all the land and regulate what you can do with it.  In the South, the resentments runs even deeper.

After the Civil War, the North replaced Southern state governments with its own hand-picked governors. The profit-seeking carpetbaggers came, it seemed to those I interviewed, as agents of the dominating North. Exploiters from the North, an angry, traumatized black population at home, and moral condemnation from all—this was the scene some described to me. When the 1960s began sending Freedom Riders and civil rights activists, pressing for new federal laws to dismantle Jim Crow, there they came again, it seemed, the moralizing North. And again, Obamacare, global warming, gun control, abortion rights—did these issues, too, fall into the emotional grooves of history? Does it feel like another strike from the North, from Washington, that has put the brown pelican ahead of the Tea Partier waiting in line?

And then there’s the last issue:  waiting in line.  Hochschild identifies a deep story that runs through all of the accounts she heard, and at the heart is a sense of resentment about being treated unfairly in the pursuit of the American Dream.  The dream is all about the possibilities for getting ahead, and this means an orderly process of status advancement in which people wait in line until it’s their turn.  The core problem is that suddenly they find other people cutting in front of them in line, and the federal government is helping them do it.

Look! You see people cutting in line ahead of you! You’re following the rules. They aren’t. As they cut in, it feels like you are being moved back. How can they just do that? Who are they? Some are black. Through affirmative action plans, pushed by the federal government, they are being given preference for places in colleges and universities, apprenticeships, jobs, welfare payments, and free lunches…. Women, immigrants, refugees, public sector workers—where will it end? Your money is running through a liberal sympathy sieve you don’t control or agree with. These are opportunities you’d have loved to have had in your day—and either you should have had them when you were young or the young shouldn’t be getting them now. It’s not fair.

You’re a compassionate person. But now you’ve been asked to extend your sympathy to all the people who have cut in front of you. So you have your guard up against requests for sympathy. People complain: Racism. Discrimination. Sexism. You’ve heard stories of oppressed blacks, dominated women, weary immigrants, closeted gays, desperate refugees, but at some point, you say to yourself, you have to close the borders to human sympathy—especially if there are some among them who might bring you harm. You’ve suffered a good deal yourself, but you aren’t complaining about it.

David F. Labaree is Lee L. Jacks Professor at the Stanford University Graduate School of Education and a professor (by courtesy) in history. His research focuses on the historical sociology of American schooling, including topics such as the evolution of high schools, the growth of consumerism, the origins and nature of education schools, and the role of schools in promoting access and advantage more than subject-matter learning. He was president of the History of Education Society and member of the executive board of the American Educational Research Association. His books include: The Making of an American High School (Yale, 1988); How to Succeed in School Without Really Learning: The Credentials Race in American Education (Yale, 1997); The Trouble with Ed Schools (Yale University Press, 2004); Someone Has to Fail: The Zero-Sum Game of Public Schooling (Harvard, 2010); and A Perfect Mess: The Unlikely Ascendancy of American Higher Education (Chicago, 2017). View All Posts