This post is a continuation of my tribute to Joe Moran’s lovely book, First You Write a Sentence.  It’s part of my ongoing series of posts about issues in writing and books on writing.  What I like so much about Moran’s take on the subject is that he not only gives cogent advice for how to write better, but also he provides a stellar model of how to do so with grace and flair.  Never has there been a book about writing that is more fun to read.  He draws on some powerful examples of good writing, but most of the most memorable sentences in this book about sentences are his own. 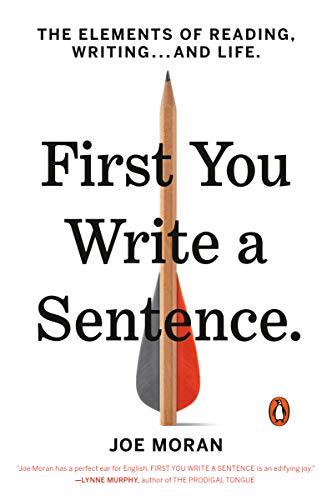 Here he is talking about the balancing of concrete and abstract nouns:

We need concrete nouns to name solid things, and abstract nouns to give the vague notions in our heads a nouny solidity. Only with both of them can we capture what it is like to be human and alive.

Unlike other animals, humans do not just use their own data collection to find stuff out; they use data collected by others. Abstractions are how people share this second-hand knowledge, coming up with broad categories for things that, for convenience’s sake, ignore differences. The word home ignores the differences between houses, flats, bungalows and that blurrily mapped place where the heart belongs. Without this abstracting quality, we could never share with strangers all the things we know.

Writing stuck on one rung of the ladder of abstraction is too monotone. Arguments that use only abstract nouns, like truth and power and knowledge, are hard to care about because writing that sidesteps the senses is dull.

One ailment that particularly afflicts academic writing is the overuse of nominalizations.  These are the words that turn dynamic processes (verbs) into nouns:  stratify vs. stratification, educate vs. education.  They’re useful because they compress a lot into a single word, so you don’t have to repeat the entire action sequence that they represent.  They provide abstract categories for incorporating disparate concrete experiences.  But too many of them can drain all the energy from an argument and dull the senses of readers.

A nominalization traps energy inside it, turning fluid actions into unmoving things. It is the white dwarf of the sentence. A white dwarf is the shrunken remains of a star, in which gravity has packed the protons and electrons so tight that a spoonful of matter weighs tons. A nominalization is the shrunken remains of a verbal clause, a noun-heavy mass compacted with pre-learned knowledge. But pre-learned by whom? Your reader, you hope – but you can’t be sure.

If you want to see how much your own writing is burdened by nominalizations — which Helen Sword calls “zombie nouns” — you should paste a piece of text into her Writer’s Diet Test.

Here’s Moran exploring the problem of too many nouns in your writing:

English is getting nounier. More than half the words in the dictionary are nouns and the number rises each year.

Single nouns grow into noun strings, in which the nouns retool as pseudo-adjectives. In theory these strings, like supply chain resource issues or website content delivery platform, turn all but the last noun into an adjective. In practice, we read them all as nouns until we get to the last one and have to untie the whole string.

This noun-ridden language – stale, self-proving, sleepwalking from one big noun to the next – has become the argot of modern managerialism. To measure its staleness, count the nouns. The nouniness of a piece of writing is a sure sign of lack of care for the reader and lack of thought in the writer. For writing is not just a way of communicating; it is a way of thinking. Nouny writing relieves the writer of the need to do either.

It’s clear how to fix the problem of nouniness, but it’s hard to carry this out in your own writing.

How do you breathe life into sentences choked with nouns? Simple: use verbs. Disinter the buried verbs and bring them back to life by reverbing them. Unspool the noun strings, restoring the proper links between the nouns by adding verbs and prepositions, even if this means using more words. Turn weak verb–noun phrases into verbs. Puts emphasis on: emphasizes. Gives the impression: suggests. Draws attention to: notes. Turn other parts of speech into verbs. Verbs born of adjectives – we dim lights, tame hair, muddy prose – can be especially cinematic.

Solid things only seem solid because their movements are too small to be seen. Things are not things but happenings. Nothing stays still, ever. Life is a noun but it can only be lived as a verb.

Adding strong verbs is hard. A sentence should be a labour to write, not to read. Nouny sentences are the reverse: a labour to read, a breeze to write.

One of Moran’s models for good writing is William Tyndale, who wrote the English translation of the bible that evolved into the King James version — the most influential text in the language.

If you want to write a short, simple, sweet-sounding sentence, Tyndale will show you how.

He has the same ear for vivid sayings, pitched just above normal talk, such as the salt of the earth or the powers that be or in the twinkling of an eye. Just as a proverb does, he takes the spoken word and moves it up a notch, while keeping the pulse and beat of speech.

Sentences should be as much like speech as you can make them – so long as you remember that they are nothing like speech. Writing needs to retain the loose shapes of talk, its rhythmic curves and breathing pauses, but overlay them with the tighter shapes of writing. Tyndale’s sentences feel like that. They land in this sweet spot, this fertile ground between writing and talk. They have godly grandeur but vernacular ease, the stateliness of liturgy but the artlessness of speech. A sentence should ring in the head but be wrought like writing.

One secret is to rely heavily on the short, strong words that were part of Old English, long before the Norman invasion brought Latinate words into the language.

Tyndale has a trick to make his prose more speech-like: he uses short words. The ancient Hebrew and Greek of the Bible have few long words, and nor does the language Tyndale relies on: Old English.

Old English words like ooze and spit retain an onomatopoeia that perhaps all words once had. Old English shut and shun sound out their meanings; Middle English close and avoid do not. Old English verbs, like flee, beckon, bless, and chew, are full of, to use an Old English noun, pith.

Old English is the tongue of a pre-literate people, whose lives turn around family, tribe and the elemental world that we know as children – of night and day, cold and dark, breath and life, meat and bread, hunger and thirst.

More from Moran in future posts.  But do yourself a favor and read the book.