This post is a reflection on the peculiar history and social structure of imperial Venice, drawing on a 2013 book by Garry Wills, Venice: Lion City — The Religion of Empire.

On the surface of it, Venice was the unlikely hub of an empire. It was a city-state with a small population and no sizeable land holdings.  Yet it came to dominate the Adriatic and much of the eastern Mediterranean and once managed to conquer and loot Constantinople, the capital of the Byzantines.  As Wills shows, in this gracefully written book, the city’s apparent weaknesses turned into its strengths.  Here’s how he describes the peculiar character of the place:

Venice is a thing made as no other city is. It created its own site, its chain of islands built up and hardened in a soup of surrounding marshes. Its buildings were raised on subaqueous platforms of piles—piles driven, in stripped forests, down out of sight. The crisscrossing canals that serve as its avenues and lanes were sluiced by guided waters, with slender boats threading this labyrinth at the touch of a single oar. The very marginality of Venice made it safe, poised between the Byzantine East and the Gothic West, between papal South and Germanic North. Yet it purchased this marginality by pitting its skill against rising and falling waters, which perpetually threatened its islands with spates from the rivers spiraling out into its lagoon, or periodic tides shouldering back toward it. Venice’s level of safety was always measured in inches. Its fragility was the paradoxical source of its stability over time. It had to be very careful about preservation, as a solid thing on a fluid base. 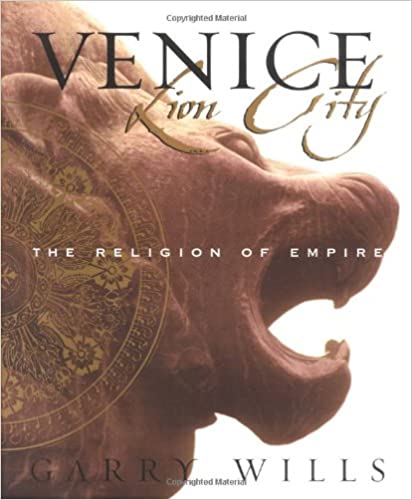 Whereas the feudal societies of Europe relied on castles to defend their territories, Venice had water as its protective barrier, and instead of an army it had a navy as its military arm.  In many ways, the Venetians modeled their empire around Athens rather than Rome.

Venice’s imperialism resembled…that of ancient Athens. I realize that Florence is usually called the Athens of Renaissance Italy, the center of learning and art; but Venice has a far better claim to that title. Periclean Athens, a sea empire, used its land enclave as a staging area for ventures into a watery world of restive subordinates or hostile rivals. Athenians, as much as Venetians, felt that they were different from the rest of mankind, separate, autochthonous (sprung out of their own turf). They could preserve that difference from others only by a certain sameness among themselves, a tight internal cohesion.

A comparative lack of internal rebellion and external invasion made it possible for Venice to keep itself to itself. Its boast was to be Serenissima, “Most Undisturbed.” This continuity called for a high degree of discipline that goes against the later myths of Venice as the hedonistic world of secret vices. That reputation grew up after Venice had lost the empire that it ruled only by self-rule. By the eighteenth century, Venice had begun its later career as a museum, selling itself to tourists rather than imposing itself on subjects.

At core, Venice was all about trade rather than warfare.  It fought to preserve and advance its commercial interests, and it was more interested in reaping income from its subjects than in governing them.  As Wills notes, “There was none of the snobbism toward ‘trade’ that land wealth encourages.”

You can see the difference in the architecture:

The government buildings on the mainland were fortresses—rugged stone structures with large internal courtyards for the assembly of mounted troops….  Venetian buildings, by contrast, were fairyland fabrics. The Doge’s Palace has a crenellated top derived from saw-toothed battlements, but here it looks like lace on a doily. The precious stone slabs on palace façades are not meant to brave artillery fire. The thin brick walls of the palace’s seaward flank could afford to be fragile, since Venice, like ancient Athens, had “wooden walls”—the hulls of its fleet—to keep the enemy off.

But it was hard work to maintain the cohesion of the city and preserve the reach of its empire, which called for a strong polity and a culture of cooperation.

The lagoon city was an exotic, in perpetual need of food and supplies—timber for its ships, access for its trade, the respiration of a larger air than the lagoon could provide. It needed precariously balanced and always shifting alliances to prop up its imperial holdings. Though the home base was solid, all its diplomatic and commercial and military outworks had a Tinkertoy fragility and interdependence of the parts. The base had to be solid because the far-flung outworks that rested on it were so vulnerable. People cooperate with vigor, follow leaders, coordinate their efforts, when they act from a sense of shared danger and reciprocal need.

Strong religious and patriotic ties were needed to hold the whole system together. That is why neither Athens nor Venice, in its rise to supremacy, used slaves to row its warships….  [And] Venice was, like Athens, a state of merchant-warriors.

Given the small size of the republic’s base, given the fact that its adversaries usually had greater numbers in terms of total population, Venice had to survive by superior knowledge, cleverness, and maneuverability. The price of independence ran high, but its rewards were correspondingly exalted. It was hard to be a city apart yet a trader with the world. The precondition of undertaking the operation at all was a discipline of independence, one fed from deep religious conviction about the service of Saint Mark.

Venice called itself a republic, but it was really an oligarchy.  It had a ruling class of patricians that was established by law and constituted only a tenth of the population.  The other orders of society were drawn to support the government not by feudal subordination but by the community of interest.  From top to bottom, everyone had a stake in the preserving and enhancing the business of trade that formed the basis of everyone’s existence.

One secret to the success of the republic was that the patricians were obligated to split their time between commerce and service to the city.

The patriciate’s determination to maintain a discipline of service was declared, as we have seen, in its dress code. In public, all nobili had to wear a uniform, a plain black robe (called a toga), and they had to observe other sumptuary laws against conspicuous consumption. This limitation came partly from merchant attitudes toward thrift, but it was also meant to stress the equality of the caste’s members (avoiding flagrant signs of inequality) and to impress others with the discipline of service to the state.

Another part of the formula was that power was deliberately divided so that one person or one group would never be able to take control.  The chief executive, the doge, was powerful but carefully hedged about with checks and balances from a bewildering array of political bodies; and he was also quite elderly, so tenure was limited.

Where was the real center of power in the Venetian government—with the doge, the Senate, the Ten, the Collegio, the Larger Council? Looking for the inmost node is like looking for a pea under the flying shells of a master con man. The whole trick of government in Venice was to have no center. It was, as Robert Finlay puts it, government “by an endless succession of committees” ( F 34).

Yet another component of the empire’s success was its remarkably flexible foreign policy.

At times, naturally, it served Venetian interests to act in alliance with the pope. Venice remained free to move in any direction that would maintain commercial ties with other powers, whether pope or emperor or sultan. This readiness to sit loose to any connection with others gave Venice a reputation as perfidious. On the other hand, it helped foster domestic tranquillity, since factions that had business ties with other regions could be placated by readjusting those ties to reflect opportunity or peril. To keep all these balls in the air, Venice had to develop an international intelligence-gathering operation, and a diplomacy, that were famous for their penetration of other nations’ secrets.

There was no ruling ideology except profit, so Venice never sought to impose its religion, culture, or way of life on others.

Though Venice praised republicanism in general, a sense of its unique birth and circumstances meant that it never seriously thought there could be other Venices. It had this virtue in its megalomania, that it was not a redeemer nation, not a savior of others, only of itself. It was not out to convert or crusade, only to trade. It joined Crusades, for what was in it for Venice, but it could always strike a deal with the other side. Its very worldliness made it tolerant of anyone who could offer a market. Venice had no libido dominandi, only a libido vendendi, a vendor’s compulsion. This freed it from a lot of pious bullying in the Kipling vein. If Venice dominated its imperial holdings, this was done only so far as domination could be made profitable. People’s souls were left alone as the merchants of the Rialto went after their purses.

The moral of the story of the Venetian empire is that necessity is not just the mother of invention; it can also be the basis for community.   People stick together over time because they have to in order to survive, and even common laborers were willing to pull an oar on the galleys without coercion.  When you build your city on a lagoon rather than dry land, you can’t afford to squabble with each other or ever let your guard down.