History is full of ironies.  One is that sometimes buffoons can be more beneficent national leaders than great men.  A case in point is Napoleon III.  My source for this analysis is the new book by Alan Strauss-Schom, The Shadow Emperor: A Biography of Napoleon III.

Louis Napoleon Bonaparte was the undistinguished nephew and heir to one of the towering figures in world history, Napoleon Bonaparte, who became emperor of France and ran roughshod over Europe for nearly 15 years.  For comparison, just look at the images of the two men below.  The first says: twit alert.  The second says: danger ahead. 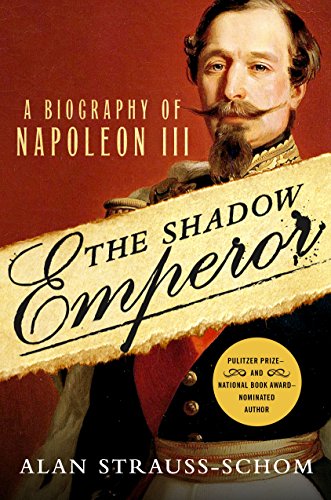 Perhaps the classic and certainly most devastating comparison between the two men came from Karl Marx on the opening page of his book about the coup that made the nephew emperor, The Eighteenth Brumaire of Louis Bonaparte.  (Eighteenth Brumaire was the date in the revolutionary calendar (November 9, 1799) when the uncle seized power and later crowned himself emperor.)  Here are the opening sentences to the book:  “Hegel says somewhere that great historic facts and personages recur twice.  He forgot to say, “Once as tragedy, and again as farce.”

It’s hard to question the accuracy of Marx’s judgment.  Though Louis always dreamed of succeeding his uncle as emperor of France, it took him three tries to get it right.

In 1836, he and 11 others walked into the French garrison in Strasbourg, where he asked the men to support him in restoring the empire. The puzzled troops declined, and King Louis Phillippe banished him to England.

Then in 1840 he sailed from London to Boulogne, this time with 55 men in uniform — few with military training and many his personal servants dressed up as soldiers — and marched up to the doors of the chateau, demanding to be let in.  Local troops routed this motley group and captured Louis.  After trial, he was sentenced to prison, where he kept busy for six yeards writing pamphlets and fathering two children with a maidservant.

Then “Early on May 25, 1846, after shaving off his distinctive mustache and donning a long black wig, a workman’s blue blouse and trousers, wooden sabots, with a clay pipe in his mouth, and carrying a plank over his shoulder, Louis Napoléon sauntered lazily past some of the carpenters carrying out repairs in the fort.”  He headed back to London to make his next move.  Really, you can’t make this up.

His time finally came with the revolution of 1848, which displaced Louis Phillippe and set up the Second Republic.  The popularity of Napoleon I had been growing, as shown by the massive public ceremony in 1840 when his remains were brought back from Elba and installed with honors in a tomb at the Invalides.  So Louis returned to Paris, was elected to the assembly, and then won election as president.

When the assembly voted to restrict the ballot and thus deny him the support he would need for reelection, he planned another coup.  This time he had sense enough to let his half brother Auguste de Morny handle the arrangements for an attempt to take place on an auspicious date for the empire — December 2, 1851 — which was the anniversary of the Napoleon’s great victory at Austerlitz and also his coronation.  For once everything went off with military precision.  It was also a very popular move with the public, who on December 20 voted to give him the presidency for a ten-year term.  The tally was 7 million to 600,000.  Next year, he was made emperor, affirmed by an even larger majority of the voters.  Not bad for the leader of the gang that couldn’t shoot straight.

But he hadn’t lost his knack for bumbling.  He stumbled into several unnecessary wars — the Crimean War and the Italian wars — where more soldiers died of incompetent leadership and disease than from battle.  He invaded Mexico to try to install an Austrian archduke as emperor, which ended in humiliating defeat.  He doubled down on the French occupation of Algeria,  a conflict that would continue  for the next century.  And he sent troops into Indo-China, which also led to a century of colonial conflict.  That’s a lot of damage for his 19 years as emperor.

But the worst came at the end, when Louis allowed Bismarck to lure him into a war with Prussia, which the latter had been planning for years as a way to revenge Prussia’s defeat by Napoleon Bonaparte and a way to bring the German states together into a German Empire.  Louis’s troops were badly equipped and had no war plans to follow.  Worst, they had the emperor in their midst to muddle lines of authority.  The battle of Sedan in 1870 was a devastating defeat for the French, and Napoleon himself surrendered to the Prussian king.

The result was devastating for France and for Europe as a whole (helping set up conditions for the First World War).  With the army at Sedan out of the way, the Prussians marched on Paris, defeated a leaderless empire, and marched triumphantly through the city.  France set up the Third Republic and then immediately had a bloody battle with the Paris Commune, where workers had risen in revolt.  Napoleon III died two years later in English exile.

Oh yes, one more thing:  “he made a laughingstock of himself by having to bed every silk skirt in Paris.”

The list of his conquests was not only long, it was public, including the companions and ladies-in-waiting of the empress. For all his charms and admitted interest in major social causes, including new hospitals, schools, and housing, Napoléon III was at the same time thick-skinned to the point of deeply wounding and publicly humiliating Eugénie. Harriet Howard and her children and his own prison-born bastards were long out of sight. But then there had been Augustine Brohan, Alice Ozy, Countess Parada, Countess de La Bédoyère, the Countess Walewska, Madame Rimsky-Korsakov, and now La Castiglione; and later, Marguerite Bellanger, Valtesse de la Bigne, and Countess Mercy-Argenteau, without counting “the actresses” and the ladies of the court.  Louis Napoléon was indeed a womanizer on an imperial scale.

Ok, you’re asking.  Where’s the beneficent part?  When did the doofus actually do good?

First of all — competence aside, Napoleon III was not a bad guy.  For one thing, he was remarkably likeable, something that no one ever said about his uncle.  Queen Victoria and Prince Albert adored him.  So did his jailers.

Regardless of his Germanic accent in French and English, the prince’s winning Old World courtesy and mild temperament won over everyone, including the guards. Despite his notorious reputation, despite his two failed attempts to overthrow the government of France, despite his having shot an unarmed French soldier, it was simply very difficult to dislike the man.

More substantively, Louis’s heart was not in making war but in liberal reform, modernizing France, and support for the working class.  Strauss-Schom puts it this way:

The longest lasting and certainly the most complex conflict of the Second Empire was the battle between Louis Napoléon Bonaparte, the follower of Saint-Simon, and the Emperor Napoléon III, the leader of his country….

As a liberal reformer, Louis Napoleon did some amazing things.  His most visible gift was the complete remaking of the city of Paris, which at the time he took power was a collection of medieval villages with narrow, filthy streets, no sanitation or running water, and an appalling death rate.  He turned it into the magnificent modern city that we all love, with broad boulevards, expansive squares, and stunning buildings.  He made Baron Haussmann prefect of Paris, and the rest is history.

By the time Haussmann stepped down in January 1870, he had overseen the demolition of 19,722 buildings, which had been replaced by some 43,777 new structures, all with running water and sanitary facilities. He had designed and overseen the construction of ninety-five kilometers of broad new gas-lit streets, including most of the great thoroughfares of the capital.

And the improvements were not just to the physical environment; he also had a big impact on social welfare.

The last vestiges of the eighteenth century were carried away with the rubble from the demolished medieval buildings. A fresh breeze wafted across the French capital, transforming not only the avenues and architecture but the entire attitude and outlook of the people liberated from the restraining values and ideas of the past. Thanks to Louis Napoléon’s emphasis on public education, the working classes were finally taught to read and write, and new book publishers, new newspapers, reviews, and magazines multiplied, bringing literary creation as well as news from across the world and the ever expanding empire.

The living and working conditions of the working class — totally ignored by Napoléon — became a lifelong preoccupation with Napoléon III. Crowded medieval tenements, contaminated drinking water, and the lack of sanitary facilities and sewage disposal resulted in tens of thousands of deaths in Paris alone every year.  At the same time, the vast rebuilding of the capital put many tens of thousands of the unemployed to work. Louis Napoléon also introduced farsighted job-creation and old-age pension schemes for the working class, not to mention mandatory education at the primary school level.

The rebuilding of Paris did come with a major cost, however, one with long-term consequences:  “no provision was made for rehousing most of those displaced, who were destined “to disappear” into the outlying suburbs. ” Sounds like Robert Moses in NYC, doesn’t it?  These suburbs (banlieus) became a major breeding ground for hostility among their working class and immigrant inhabitants.  But even here Louis tried in his own way do to something about the problem.  “He was personally to buy out of his own pocket some of the condemned properties near the Gare de Lyon and build a new Saint-Simon-style housing project for a few thousand people.”

Louis also did a lot to advance science, technology, finance, business, agriculture, and the environment.  He built miles of railroads and created a fleet of steamships,

Louis Napoléon introduced recent agricultural methods, creating numerous model farms, and supported Louis Pasteur and other scientists in their research. He also supported the creation of public and private sector banking credit facilities for the advancement and expansion of agriculture. Millions of acres of wasteland and swamp were reclaimed on his orders and turned into agricultural production, this at a time when there was neither public environmental interest in, nor demand for, such government programs. As a result of his determination, corn and wheat production soared, as did the nation’s wine output. The physical and chemical sciences were also greatly encouraged with fresh funding and prizes, and new specialist hospitals were built throughout the country.

Here is how Strauss-Schom sums up the comparison between the two Napoleons:

A very dynamic and demanding Napoléon I had dominated the empire he created, while a far less vigorous and egotistical Louis Napoléon happily remained in the shadows of the very empire he in turn created. And yet despite some errors of judgment, obvious lack of organizational skills, and sometimes maddening indecision, beneath that quiet, good-humored exterior, Louis Napoléon achieved vastly much more in the long run for France than did the brilliant, swaggering soldier Napoléon I. His Second Empire now left France one of the most prosperous, modern, and progressive states in Europe. Rarely in the history of any country does it fall to one head of state to so completely alter the face and future of his civilization, to bring one’s country and its infrastructure out of an older traditional century into a thriving modern age. This most unlikely Louis Napoléon Bonaparte was just such a man.

Sometimes it’s the doofus who does good.