So in this talk, I tried to lay out the historical evolution of American education schools and the process by which they became differentiated.  It was also a chance to explore the delicate balance by which graduate schools of education try to bridge between being professional schools and research institutions, preparing educators and preparing researchers.  As the history shows, research-oriented ed schools have been in a much more precarious position than those devoted to teacher education.  Their carcuses are scattered across the landscape of educational history in the late 20th century.

I hope you find this interesting.

P.S. — Check out the branded vest: 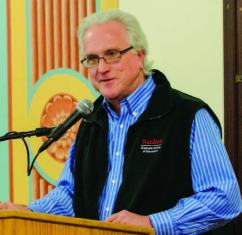 In some ways, education schools are much like the rest of American higher education in that branding is everything.

You may be thinking the same thing I am:  Why are we here?   Ok, so we’re changing our name.  But why throw a party, why hand out all the loot with the logo?  We took the name, school of education, and added one word:  graduate.  What’s the big deal?

As someone who has looked at the history of education schools, I thought I’d try to answer this question, which really has two parts:  Why are we changing our name?  And why are we doing it now?

On the surface at least, why we’re doing it is easy.  We’re changing our name to bring it in line with the kind of institution that we really are.  We’re a graduate school of education.  Enough said.

But maybe a little background would help.  Historically American education schools have emerged in two forms.  The large majority are located in institutions that evolved out of normal schools – which over 100 years turned into teachers colleges, state colleges, and eventually regional state universities.  The California State University system is a case in point.  Ed schools in these institutions tend to focus heavily on the production of teachers, administrators, and other school personnel.  The large majority of educators in the U.S. graduate from these places.  Given their focus and the nature of the universities where they’re located, they don’t have the time or resources to deal with advanced graduate programs or do a lot of research.  They usually call themselves schools or colleges of education.

On the other hand, a small number of ed schools came into existence through a different route.  They were created around the turn of the 20th century within existing elite universities, and they have focused primarily on doing research and offering advanced graduate programs of study.  Because of this focus, they typically engage in the preparation of teachers and administrators at a much smaller scale than the others.

The second is a pretty good description of the kind of institution we are; most of our peers call themselves GSE’s, so it makes sense for us to do so.  But why do so now?  After all, we have been operating as a top ranked graduate school of education for at least 50 years.

Therein lies a tale.  The short version is that over the years operating a graduate school of education has proven to be risky business.  Ed schools within former normal schools have a long and stable history of growth and development.  But research-oriented ed schools have periodically found themselves under threat.

The problem is that the successful research-oriented ed school has to maintain a very tricky balance.  It has to excel at the production of high quality research and at the graduation of high quality master’s and doctoral students.  At the same time, it needs to be playing an effective role as a professional school – closely connected to the educational professions, responding to the needs that arise from these professions, and contributing to the development of educational policy.  The kinds of things that professional schools traditionally do.

In practice this has not been easy to accomplish.  After World War II, research universities responded to huge surge in higher education enrollments by shoring up their distinctive character as the academic elite of the system.  So they put pressure on schools to demonstrate that they had the academic chops to be part of such a university.  The pressure was particularly strong on professional schools that had had a reputation for being academically weak, such as business and education.  These schools dutifully shifted their emphasis in the desired direction – dropping undergraduate instruction, ramping up master’s and doctoral programs, increasing research effort, and establishing themselves as the academic peers of colleagues across campus.

But this effort threw things out of balance.  Many such schools, including our own, became less professional schools of education than graduate schools of educational studies.  They focused on high-level disciplinary research on education but with minimal investment in professional training and few connections with the field of practice.  And, one after another, research-university presidents starting asking what value these ed schools added to the institution.  “You’re not really professional schools,” they’d say.  “Instead you’re doing disciplinary research about education.  But we already have people in the disciplines who do this work, and they’re the real thing.  So who needs you?”

One after another, elite ed schools started to receive the death sentence, or came close.  In the 50s, Yale and Johns Hopkins eliminated their ed schools; in the 70s, this happened at Duke; in the 90s it happened at Chicago; in the 2000s it happened at Arizona State.  In between in the 80s there was a series of skirmishes that threatened such schools across the country.  Berkeley had a major battle, which eventually led to the preservation of the school, but it was a near thing.  Michigan considered a major downsizing of it ed school, and here at Stanford there was talk of turning the school into a program.  Like most of our peers, our own school of education was heavy on research but light on professional identity and involvement in practice.

Here and elsewhere, deans got the message.  Deans are usually the ones who get the message about these kinds of things, not faculty.  We in the faculty don’t care much about what’s going on in the environment as long as we keep getting grants and students and continue to have time to do our research.  By the time we learn about trouble, it’s probably too late.  But deans have the job of looking around the neighborhood for signs of trouble.  That’s why they get paid the big bucks.

So we had a series of deans – starting with Mike Atkin, then Mike Smith, Rich Shavelson, and Deborah Stipek – who had a clear mandate to restore the balance.  This meant shoring up the school’s professional mission and connections with practice while still maintaining excellence at producing research and PhDs.

Over the next several decades, the Stanford School of Education moved to enhance its professional commitments.  We reconstructed the secondary teacher education program, bringing in senior faculty to design and operate a model program that would build on research and enrich the profession.  We brought in faculty who forged close relationships with schools, both as research sites and as places for professional intervention and service.  We increased our effort and visibility in the world of educational policy at both the state and national level.  We set up a series of major centers focusing on issues of policy and practice.  We added an elementary teacher education program.  And we developed a close relationship with a local charter school.  Overall these efforts have been enormously successful.  This is now a school that has established a stable and credible balance of missions.

As a pragmatic matter, these were smart moves to make for an institution that wanted to survive on the high-wire perch of the elite ed school.  Those of us who are associated with the school – deans, faculty, staff, students, and alumni – want it to do well for our own personal reasons.  But what possible benefit does this kind of rebalancing effort offer for the educators and students in our public schools, for the public officials who rely on schools to address major public problems, and for citizens who rely on schools promote individual opportunities?  What’s in it for them?

It turns out there is broad array of benefits for both schools and society.  A rebalanced graduate school of education can facilitate a fruitful conversation across barriers that have long divided educational research and educational practice.  It can provide empirical and theoretical grounding for the work of practitioners, while also serving as a resource for addressing the problems that arise from practice.  It can offer lift for teachers and administrators who find themselves dragged down in the machinery of schooling, and it can offer ballast for university researchers who find themselves floating high above the fray.  Both sides need each other, and a balanced GSE can be a way to bring them together.

This, then, is another answer to the question of why we’re making a big deal about a change of name:  Because our newly rebalanced mission can make a real contribution to the field.

And what about why we’re making the change right now?  I already gave the pragmatic answer:  Such a move would have been risky.  But in addition I think it’s because at this point in history the querulous state of school reform means there is urgent need for a voice such as ours – which can insert the long view into a notoriously short-sighted conversation and also can keep the discourse intimately linked to teaching and learning in classrooms.  We need an institution that can remind people of the higher historic purposes of education, while also lowering expectations that schools by themselves can solve our most urgent social problems.

And that is the kind of role that our school plays today.  We produce research of the highest quality, which shapes the intellectual contours of our field; and we prepare educational researchers of the highest quality, who become some of the leading scholars of the next generation.  At the same time, we educate model teachers and educational leaders, who go on to exert an impact on the world of practice; we provide an informed and authoritative voice in the discourse of educational policy; and we work closely with practitioners at every level of the educational system.

Therefore now is a good time to declare ourselves formally as the Stanford Graduate School of Education, whose academic and professional commitments are as clearly balanced as they are clearly distinguished.