This post is a review essay by Simon Blackburn, published in 2011 in The New Republic.  Its focus is the lovely book by Stanley Fish, How to Write a Sentence: And How to Read One. Here’s a link to the original.

I used this book in a long-time course I taught about academic writing.  (You can find the syllabus here, which includes with links to readings and course resources.)  Fish is a connoisseur of sentences, as all good writers are.  As Blackburn says, “it is what Conrad called the “shape and ring” of sentences, the perfect adaptation of form to achievement, that Fish wants to share.”

Change the shape and ring, and you change everything. The balance, the alliterations, the variation, the melody, the lights glimmering in the words, can work together to transform even an ugly thought into something iridescent, as when Eli Wallach in The Magnificent Seven expressed his character’s indifference to the suffering he brings the peasants in one perfect, albeit perfectly brutal, sentence: “If God didn’t want them sheared, he would not have made them sheep.” As Fish says in his analysis of this example, here the “air of finality and certainty” is clinched by “the parallelism of clauses that also feature the patterned repetition of consonants and vowels” and then, of course the inevitability of that last dismissive word. If the devil has the best tunes, sometimes the bandits have the best sentences.

Fish is at his best in exploring the formal structure of the apt sentence.  Study such a sentence to determine the form that underlies it, and then you will be able to use this form yourself to create your own memorable statement about an entirely different subject.  Here’s how Fish puts it:

The conventional wisdom is that content comes first – ‘you have to write about something’ is the usual commonplace – but if what you want to do is learn how to compose sentences, content must take a backseat to the mastery of the forms without which you can’t say anything in the first place.

He sums up the point with a sentence I wish I had written: “You shall tie yourself to forms and the forms shall set you free.”

Hope you enjoy this piece.

Reviewing How to Write a Sentence: And How to Read One by Stanley Fish 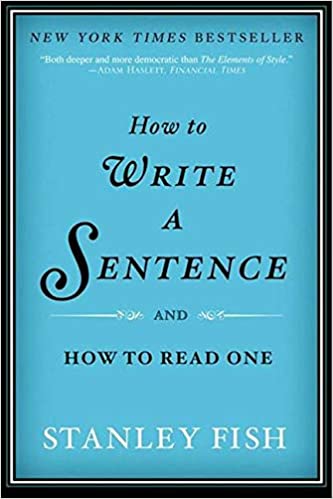 WE HUMANS CAN APPRECIATE many things. It is one of our most attractive qualities. How could Rodolfo not fall in love with Mimi as she sings her own rapture at the first sunshine after winter, the first kiss of April? In this small feast of a book Stanley Fish displays his love of the English sentence, and even without Puccini to help, his enthusiasm is seductive. His connoisseurship is broad and deep, his examples are often breathtaking, and his analyses of how the masterpieces achieve their effects are acute and compelling.

For Fish a great sentence is like a great athletic performance. It is an example of something done supremely well, so well that it cannot be bettered. Other similar feats will come along, but only to stand alongside it. What exactly is done in such a performance? There is no single answer, indeed no finite answer since there is no limit to the things that can be done with words. But it is what Conrad called the “shape and ring” of sentences, the perfect adaptation of form to achievement, that Fish wants to share.

It is wrong to think that the sentence is a mere slave, whose function is to bear content, which, while being the really important thing, is also something that could equally have been borne by another. Change the shape and ring, and you change everything. The balance, the alliterations, the variation, the melody, the lights glimmering in the words, can work together to transform even an ugly thought into something iridescent, as when Eli Wallach in The Magnificent Seven expressed his character’s indifference to the suffering he brings the peasants in one perfect, albeit perfectly brutal, sentence: “If God didn’t want them sheared, he would not have made them sheep.” As Fish says in his analysis of this example, here the “air of finality and certainty” is clinched by “the parallelism of clauses that also feature the patterned repetition of consonants and vowels” and then, of course the inevitability of that last dismissive word. If the devil has the best tunes, sometimes the bandits have the best sentences.

The philosopher Frege said that only in the context of a sentence do words have meaning. Fish agrees, as did Wittgenstein: “The world is everything that is the case.” In a sentence a sequence of words becomes more than just a list. It breathes and takes wing, becoming a messenger in one or more of our innumerable transactions with the world and with each other. It may pick up the past, or tilt us towards the future. Fish illustrates how if we become sensitive to the way forms can be used and repeated, then, when we have something to say, we are more likely to have the right instrument to hand with which to say it. I hope this is true. He singles out, for instance, John Updike’s remark about a great homerun—“It was in the books while it was still in the sky”—and asks, how hard is it to write a sentence like this? In one respect, not hard at all and he offers “it was in my stomach before it was off the shelf” as his “relatively feeble” attempt to “approach Updike’s art by imitating it.” Of course, this didactic technique only takes you so far. Fish has undoubtedly perceived the way that “it was still in the sky” works, helping the record books to set that passing moment forever in the amber of time, and it may seem a little forward to suppose that any liaison between “off the shelf” and “in my stomach” goes very far towards approaching it. But we have to learn with training-wheels.

Or perhaps it is enough if we simply attune ourselves to structure, balance, rhythm, and precision. Generations of English listeners had this sensitivity practiced weekly, as the great sonorous cadences of the King James Bible rolled over them: “And the earth was without form, and void, and darkness was upon the face of the deep …” Without that astonishing language, we would have had no Milton, no Johnson, no Wordsworth, no Lawrence, no Eliot. The last is particularly interesting, since the famous words beginning his “Journey of the Magi” are directly taken from a letter Lancelot Andrewes, one of the Jacobean translators, wrote to King James: “A cold comming they had of it, at this time of the yeare: just the worst time of the yeare, to take a journey, and specially a long journey, in. The ways deepe, the weather sharp, the daies short, the sunn farthest off…the very dead of winter.” Two sentences, admittedly, but what a pair. Presumably deliberately, Fish avoids examples from either Shakespeare or the King James, preferring instead the less familiar, but to my ear less accessible, solemnities of the later seventeenth century in Milton and Bunyan.

Do shape and ring matter? Perfection always matters. Without the sensitivity Fish admires, we would not only have no great literature. We would also have had no Gettysburg address, no Churchill, and no Martin Luther King, Jr. If we cannot move peoples’ souls, we cannot move their ways of living either: “Let me write the songs of a nation, and I care not who writes its laws.” Fish is sparing of reference to philosophers, but some of us turn a reasonable sentence. “What is at stake is far from insignificant: it is how one should live one’s life” says Socrates, in a sentence that itself exhibits the excellence to which it directs us. A perfect sentence may also be dangerous. “Man is born free, but is everywhere in chains” opens Rousseau’s Social Contract, and arguably the shape and ring of this sentence orchestrated the French Revolution, and even its decline into totalitarianism.

Perhaps philosophy is not much on show since often it sends not single sentences but battalions. One of Marx’s most famous sentences works by itself, but is much better when juxtaposed with its two predecessors: “Religious suffering is, at one and the same time, the expression of real suffering and a protest against real suffering. Religion is the sigh of the oppressed creature, the heart of a heartless world, and the soul of soulless conditions. It is the opium of the people.”

Sentences matter, perhaps more than anything else, so I shall end with a contemporary application. As I write, the British government is imposing a duty on academics to show that their work has “impact,” which is to be a provable occurrence of social, economic, or political benefit, signed and witnessed within the last five years. This insanity could only have come about because not a single one of its perpetrators had read or understood one of Fish’s favorites, the final sentence of Middlemarch, contrasting Dorothea’s quiet future with the idealistic visions of doing good with which she started life: “But the effect of her being on those around her was incalculably diffusive: for the growing good of the world is partly dependent on unhistoric acts, and that things are not so ill with you and me as they might have been, is half owing to the number who lived faithfully a hidden life, and rest in unvisited tombs.” Perfect.