Today I want to explore an interesting case of counterfactual history.  What would have happened if Napoleon Bonaparte had won in 1815 at the Battle of Waterloo?  What consequences might have followed for Europe in the next two centuries?  That he might have succeeded is not mere fantasy.  According to the victor, Lord Wellington, the battle was “the nearest-run thing you ever saw in your life.”

The standard account, written by the winners, is that the allies arrayed against Napoleon (primarily Britain, Prussia, Austria, and Russia) had joined together to stop him from continuing to rampage across the continent, conquering one territory after another.  From this angle, they were the saviors of freedom, who finally succeeded in vanquishing and deposing the evil dictator.

I want to explore an alternative interpretation, which draws on two sources.  One is an article in Smithsonian Magazine by Andrew Roberts, “Why We’d Be Better Off if Napoleon never Lost at Waterloo.”  The other is a book by the same author, Napoleon: A Life. 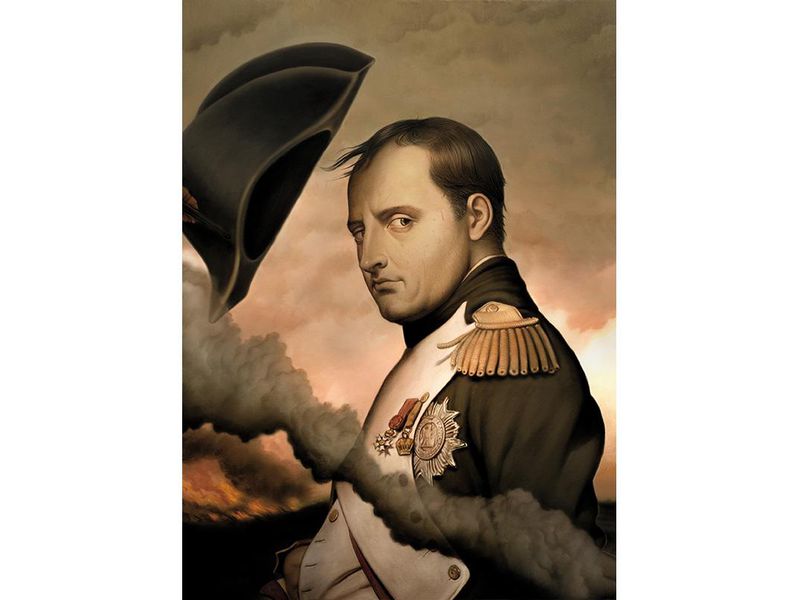 The story revolves around two different Napoleons:  the general and the ruler.  As a general, he was one of the greatest in history.  Depending on how you count, he fought 60 or 70 battles and lost only seven of them, mostly at the end.  In the process, he conquered (or controlled through alliance) most of Western Europe.  So the allies had reason to fear him and to eliminate the threat he posed.

As a ruler, however, Napoleon looks quite different.  In this role, he was the agent of the French Revolution and its Enlightenment principles, which he succeeded in institutionalizing within France and spreading across the continent.  Andrews notes in his article that Napoleon

said he would be remembered not for his military victories, but for his domestic reforms, especially the Code Napoleon, that brilliant distillation of 42 competing and often contradictory legal codes into a single, easily comprehensible body of French law. In fact, Napoleon’s years as first consul, from 1799 to 1804, were extraordinarily peaceful and productive. He also created the educational system based on lycées and grandes écoles and the Sorbonne, which put France at the forefront of European educational achievement. He consolidated the administrative system based on departments and prefects. He initiated the Council of State, which still vets the laws of France, and the Court of Audit, which oversees its public accounts. He organized the Banque de France and the Légion d’Honneur, which thrive today. He also built or renovated much of the Parisian architecture that we still enjoy, both the useful—the quays along the Seine and four bridges over it, the sewers and reservoirs—and the beautiful, such as the Arc de Triomphe, the Rue de Rivoli and the Vendôme column.

He stood as the antithesis of the monarchical state system at the time, grounded in preserving the feudal privileges of the nobility and the church and the subordination of peasants and workers.  As a result, he ended up creating a lot of enemies, who initiated most of the battles he fought.  In addition, however, he drew a lot of support from key actors within the territories he conquered, to whom he looked less like an invader than a liberator.  Andrews points out in his book that:

Napoleon’s political support from inside the annexed territories came from many constituencies: urban elites who didn’t want to return to the rule of their local Legitimists, administrative reformers who valued efficiency, religious minorities such as Protestants and Jews whose rights were protected by law, liberals who believed in concepts such as secular education and the liberating power of divorce, Poles and other nationalities who hoped for national self-determination, businessmen (at least until the Continental System started to bite), admirers of the simplicity of the Code Napoléon, opponents of the way the guilds had worked to restrain trade, middle-class reformers, in France those who wanted legal protection for their purchases of hitherto ecclesiastical or princely confiscated property, and – especially in Germany – peasants who no longer had to pay feudal dues.

When the allies defeated Napoleon the first time, they exiled him to Elba and installed Louis XVIII as king, seeking to sweep away all of the gains from the revolution and the empire.  Louis failed spectacularly in gaining local support for the reversion to the Ancien Regime.  Sensing this, Napoleon escaped to the mainland after only nine months and headed for Paris.  The royalist troops sent to stop him instead rallied to his cause, and in 18 days he was eating Louis’s dinner in the Tuileries, restored as emperor without anyone firing a single shot in defense of the Bourbons.  Quite a statement about how the French, as opposed to the allies, viewed his return.

Once back in charge, Napoleon sent a note to the allies, reassuring them that he was content to rule at home and leave conquest to the past: “After presenting the spectacle of great campaigns to the world, from now on it will be more pleasant to know no other rivalry than that of the benefits of peace, of no other struggle than the holy conflict of the happiness of peoples.”

They weren’t buying it.  They had reason to be suspicious, but instead of waiting and seeing they launched an all out assault on France in an effort to get him out of the way.  Andrews argues, and I agree, that their aim was not defensive but actively reactionary.  His liberalized and modernized France posed a threat to the preservation of the traditional powers of monarchy, nobility, and church.  They sought to tamp out the fires of reform and revolution before it reared up in their own domains.  In this sense, then, Andrews says Waterloo was a battle that didn’t need to happen.  It was an unprovoked, preemptive strike.

Andrews concludes his Smithsonian article with this assessment of what might have been if Waterloo had turned out differently:

If Napoleon had remained emperor of France for the six years remaining in his natural life, European civilization would have benefited inestimably. The reactionary Holy Alliance of Russia, Prussia and Austria would not have been able to crush liberal constitutionalist movements in Spain, Greece, Eastern Europe and elsewhere; pressure to join France in abolishing slavery in Asia, Africa and the Caribbean would have grown; the benefits of meritocracy over feudalism would have had time to become more widely appreciated; Jews would not have been forced back into their ghettos in the Papal States and made to wear the yellow star again; encouragement of the arts and sciences would have been better understood and copied; and the plans to rebuild Paris would have been implemented, making it the most gorgeous city in the world.

Napoleon deserved to lose Waterloo, and Wellington to win it, but the essential point in this bicentenary year is that the epic battle did not need to be fought—and the world would have been better off if it hadn’t been.

What followed his loss was a century of reaction across the continent of Europe. The Bourbons were restored and the liberal gains in Germany, Spain, Austria and Italy were rolled back.  Royalist statesmen such as Metternich and Bismarck aggressively defended their regimes against reform efforts by liberals and Marxists alike.  These regimes persisted until the First World War, which they precipitated and which eventually brought them all down — Hohenzollerns, Habsburgs, Romanovs, and Ottomans.  The reactions to the fall of these monarchies in turn set the stage for the Second World War.

You can only play out historical counterfactuals so far, before the chain of contingencies becomes too long and the analysis turns wholly speculative.  But it seems quite reasonable to me to think that, if Napoleon had won at Waterloo, this history would have played out quite differently.  The existence proof of a modern liberal state in the middle of Europe would have shored up reform efforts in the surrounding monarchies and headed off the reactionary status quo that finally erupted in the Great War that extinguished them all.

David F. Labaree is Lee L. Jacks Professor at the Stanford University Graduate School of Education and a professor (by courtesy) in history. His research focuses on the historical sociology of American schooling, including topics such as the evolution of high schools, the growth of consumerism, the origins and nature of education schools, and the role of schools in promoting access and advantage more than subject-matter learning. He was president of the History of Education Society and member of the executive board of the American Educational Research Association. His books include: The Making of an American High School (Yale, 1988); How to Succeed in School Without Really Learning: The Credentials Race in American Education (Yale, 1997); The Trouble with Ed Schools (Yale University Press, 2004); Someone Has to Fail: The Zero-Sum Game of Public Schooling (Harvard, 2010); and A Perfect Mess: The Unlikely Ascendancy of American Higher Education (Chicago, 2017). View All Posts